Colouring up your bill 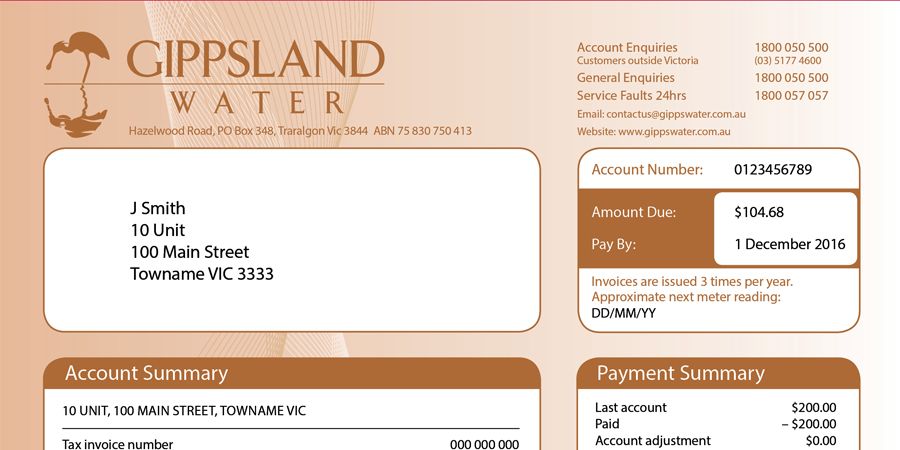 Colouring up your bill

Gippsland Water customers will notice some changes to their water bill this spring as it changes colour.

“We’ve been looking at ways of reminding customers that, while they might call it their ‘water bill’, the largest part of the average customer’s bill is in fact to do with sewerage, not water,” said Paul Clark, General Manager of Customer Service and Communications at Gippsland Water.

From early November, the customer bill will be brown in colour rather than the usual blue.

“If customers ask themselves ‘why is it brown all of a sudden rather than blue?’ then it’s been a successful awareness raising exercise”, added Mr Clark.

One of the key things that come out of our recent customer surveys is that a large number of Gippsland Water customers don’t appreciate that the water corporation treats their wastewater or sewerage.

“We’ve had a number of initiatives to raise that level of awareness, most notably the ‘Stop it Don’t Block it’ campaign which featured on television advertising, marketing material, social media and is still a feature on the side of our trucks which carry our service teams to sites across the region.”

“We hope that this ‘rebranding’ of the bill’ as well as the other materials that customers will receive with their bill with help build this awareness around the largest cost factor in customers bill,” concluded Mr Clark.

Gippsland Water customers will start to receive their brown bill from November 1st. The campaign will conclude in late February.