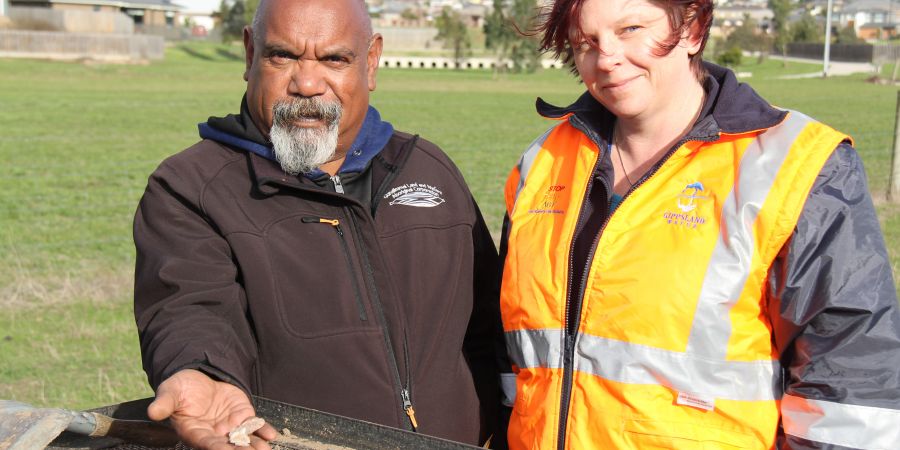 Traditional owners working on a Gippsland Water project have discovered artefacts on the outskirts of Traralgon, beside the Traralgon Creek.

Twenty one artefacts were discovered north of Waterford Court earlier this year during planning for a new sewer pipeline.

A salvage operation was recently completed to avoid damaging any remaining artefacts in the area.

Using hand tools, they removed layers of earth from the salvage area, 10cm at a time, and then sieved it for fragments of stone tools and other artefacts. Any artefacts that are recovered are catalogued, and eventually repatriated.

GlaWAC Cultural Heritage Officer Nicky Moffat said that the discovery, recording and mapping of artefacts is helping to piece together the Aboriginal history of this area.

“When we find artefacts we can look at the raw materials where they were found, and that tells us where they came from and how people moved through the landscape.

“We can look at the residues on the artefacts, and that tells us how they were used. For example, if there’s resin from the grass tree on an artefact, that tells us that they were being used to glue sharp bits onto spears,” he said.

Senior Environmental Scientist at Gippsland Water, Dr Deb Archer, said that it was a privilege to be involved in the process.

“We have been partnering with GLaWAC on cultural heritage salvage work for the last ten years. We’ve found artefacts all over our region, near waterways and wetlands, in paddocks, and even in developed areas such as here in Traralgon. On a recent project near Tyers we found over 5,300 artefacts.

“When we plan construction work, we try to avoid or minimise damage to areas with cultural heritage significance. That’s why we’ll use horizontal directional drilling rather than open trenching for this project. The areas where the drill pits will be located are being salvaged to avoid damage to any remaining artefacts and to record the history of the site,” she said.

Construction of the sewerage pipeline is likely to commence in the 2018/19 financial year.